Popular during the turn of the last century, the eugenics movement posited that certain people were more fit to reproduce than others, and that by encouraging “fit” parents to have children while discouraging (or sometimes outright preventing) “unfit” parents from doing so would improve a country’s genetic stock. Jacqueline Goldfinger’s new play, Babel, now getting its premiere at Theatre Exile, imagines a future that resurrects these values. 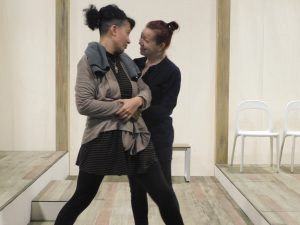 Eugenicists believed that by selecting for traits like health, appearance, intelligence, and behavior they could eradicate crime and end undesirable personality traits (including things like “promiscuity,” which of course risked the downfall of Western society). Nazis loved eugenics.

But so did much of the American intelligentsia. In fact, America continued to carry out forced sterilizations as recently as 2010. Given the very real dystopia of modern times, it’s not impossible to imagine a not-too-distant future like the one in Babel, where eugenics regains its popularity.