Tommy And Me: The Eagle Has Branded

As we stagger to the end of the dog days of summer, every local sports fan knows what that means: the Eagles are in training camp and just starting off their doesn’t-count-yet exhibition season. So what better time to offer the fourth iteration of the popular local football play Tommy and Me? Which is just what Theatre Exile did this past weekend.

The “Me” of this piece is Ray Didinger, whose own distinguished career as a local and national sportswriter/sportscaster earned him a place in the Pro Football Hall of Fame. But writing a sports column, no matter how accomplished that column may be, operates in a different sphere from playwriting. Aware of this, Didinger sought the counsel of widely lauded Philly playwright Bruce Graham. Graham’s expert advice allowed Didinger to carry out key changes that made Tommy And Me the successful work it is today.

The “Tommy” of the title is Tommy McDonald, the bantam star of Philly’s NFL team in the late 50s and early 60s. Not yet ten years old, Ray Didinger was already an ardent Eagles fan, and his favorite player was McDonald. An early scene in the play captures nicely that day at Eagles training camp when young Ray approached McDonald and impressed him with his enthusiasm and his bountiful store of football knowledge.

Didinger’s devotion to the team carried him to Franklin Field, Section EE, for the 1960 NFL championship where McDonald’s acrobatic touchdown proved the winning margin. Years later, the adult Ray interviewed McDonald about that championship year and a deep and rich friendship began.

At its heart, this play is all about friendship and the rewards that friendship can bring. But what sets it apart is that it also touches on the relationship one has with one’s own childhood. In fact, some of the play’s best and funniest scenes involve the on-stage skirmishes and sharing of memories between young Ray and adult Ray. Those scenes with pre-teen Ray goading older Ray show us that we inevitably lose something precious as we gain the advantages of adulthood and assume the responsibilities of a more complicated adult world.

These scenes are paralleled by scenes linking star flanker Tommy McDonald and the much plumper retired McDonald. (Though these two never meet on stage as do the two Rays.) The interactions between the younger versions of the two men and between young Ray and older Ray keep the play moving along nicely in the first half. And just when it looks like this dynamic is about to run out of steam, we’re presented with the first real splash of dramatic conflict as sportswriter Ray Didinger launches a campaign to get McDonald inducted into the Pro Football Hall of Fame.

For decades, the Hall of Fame selection committee snubbed McDonald even as others whose stats paled in comparison with those of the fleet-footed flanker were welcomed into the Hall. The drama mounts as the struggle to get McDonald duly recognized for his sterling achievements seems more and more doomed, with the selection committee seeming like the gods of Greek mythology: distant, arbitrary, and operating under their own, warped concepts of justice.

As mentioned above, this is the fourth version of the play. This take has a few full additions and a slew of tweaks. It also has three-quarters of the cast from the original version of 2016. As this is the first Tommy I’ve caught, I can’t say they’re getting better with age, but I can attest that they do an admirable job of making the show a success.

As the older Ray, Matt Pfeiffer was solid all the way through, nobody would mistake Pfeiffer for Didinger looks-wise, but the character he created here felt real and kept us engaged from start to finish.

In the opening scene, Tom Teti seemed a bit unsure of how to tackle the older Tommy McDonald. It took a scene or two for him to slip fully into the role. Then we could readily overlook the fact that Teti does not look even remotely like the former football star, while his accent is more Philly Bold than roving Southwestern. Most importantly: at key moments, Teti struck the right notes to help us sense the depth and decency of this former star in the autumn of his years. The phone call between Tommy and his older brother Clyde was particularly real and touching.

Frank Nardi, Jr. does bear a passing resemblance to McDonald at the height of his stardom, though he, too, made no attempt to affect the accent. Aside from that, Nardi was quite believable as young McDonald.

Simon Kiley was simply excellent as young Ray. I can’t recall when I’ve seen an actor of his age deliver such an assured performance on stage. This youngster seems to have a clear path to future stardom if he continues with acting.

And it’s only right that this review end with a clear note of praise for director Joe Canuso. Canuso was involved with the play right from the early stages of its writing, lending advice and encouragement to Didinger. He’s also directed all four versions. The clean, effective staging of a work that travels widely in time and space as well as the finely defined performances in this edition are a tribute to Canuso’s keen direction.

Tommy And Me runs at Fringe Arts, 140 N. Columbus Blvd., Philadelphia, Tues. -Sun. through 25 August. There are 3:00pm matinee performances Saturdays and Sundays; all other performances are 7:00 p.m. 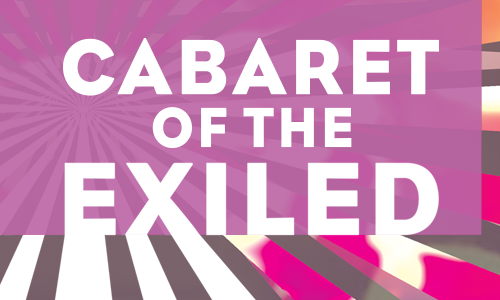 Cabaret of the Exiled Fundraiser