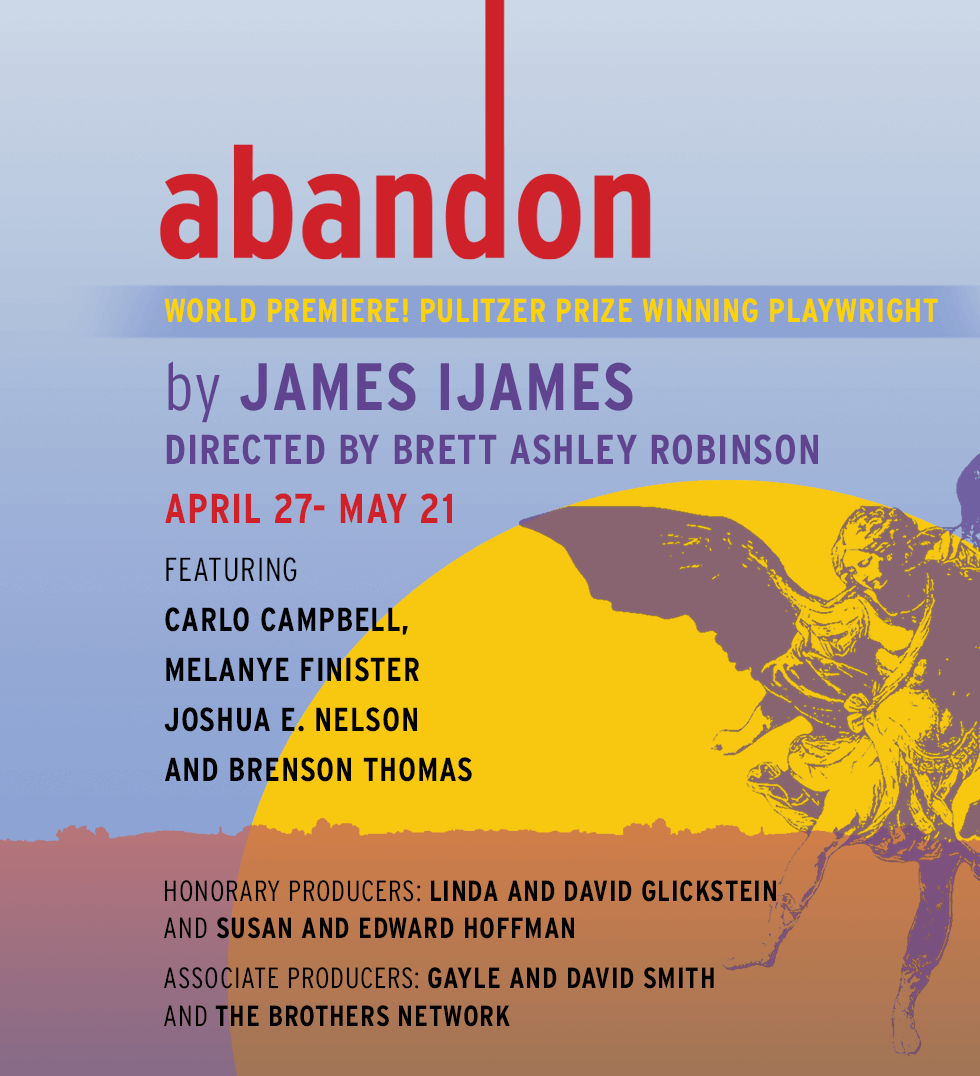 Luella is alone – haunted by the ghost of her son. Joshua is alone – kicked out of his house by his brother. One winter night these two people collide. Luella is looking for redemption; Joshua is looking for family. By the next morning, these two lonely souls are meshed together into an American Family in its truest sense. A world premiere by Pulitzer Prize winning playwright James Ijames, Abandon is sometimes violent, sometimes healing; with a gossamer veil that separates the worlds of the living and the dead, and shame and acceptance.

Melanye Finister* (Luella) is an artist and resident company member at People’s Light, a member of Wilma Hothouse, and an artistic advisory board member at PlayPenn. People’s Light: The Diary of Anne Frank, The Matchmaker, All My Sons, Fences, The Winter’s Tale, Seven Guitars, The Return of Don Quixote, Six Characters in Search of an Author, Something You Did, Fabulation, and The Member of the Wedding. Theatre Includes: Wilma Theater, Arden Theatre Company, Flashpoint Theatre Company, InterAct Theatre Company, Philadelphia Theatre Company, Venture Theatre, Temple Theaters and Walnut Street Theatre. Training: BFA, Carnegie Mellon University.

Brenson Thomas* (Gabriel) is a Black and queer writer, actor, and theatre-maker. A graduate of Sarah Lawrence College’s MFA Theatre program, his plays include how i got over, or…red Kool-Aid stains on bubblegum lips; What We Lost & Never Knew; and How We Return, an upcoming commission for Constellation Stage & Screen in Bloomington, IN. Brenson also writes for TV/Film, most recently on Emmy Award winner Lena Waithe’s Twenties on BET. As a performer, Brenson has collaborated with Tony Award Winner Stew, Raja Feather Kelly, Lightning Rod Special in The Appointment (FringeArts/Next Door at NYTW; Barrymore Nominee for Outstanding Ensemble in a Musical), Arden Theatre Company in the world premiere of R. Eric Thomas’ Backing Track, and Into the Woods, and with 1812 Productions for This is the Week That Is: 2020, and the Wilma Theater. When he’s not hunched over his laptop crying about blank Google docs, Brenson enjoys long walks around his beloved Philly, doing bad accents, smashing patriarchal white supremacist structures, and Beyoncé.

James is the 2011 F. Otto Haas Award for an Emerging Artist recipient. James is a 2015 Pew Fellow for Playwriting, the 2015 winner of the Terrance McNally New Play Award for WHITE, the 2015 Kesselring Honorable Mention Prize winner for ….Miz Martha, a 2017 recipient of the Whiting Award, a 2019 Kesselring Prize for Kill Move Paradise and a 2020 Steinberg Prize.

James is an Associate Professor of Theatre at Villanova University and a co-artistic of the Wilma Theater. He resides in South Philadelphia.

Janet Embree (Production Manager) is thrilled to be joining the team at Theatre Exile. She has managed productions at Lantern Theater Company, Opera Philadelphia, the Pennsylvania Ballet and Philadelphia Artist’s Collective, among others. She spent several years at the University of the Arts where she taught and managed productions in theater, dance and music. She also does professional upholstery for the stage and screen; one of her favorite projects can be seen in the 2018 Grammy Awards.