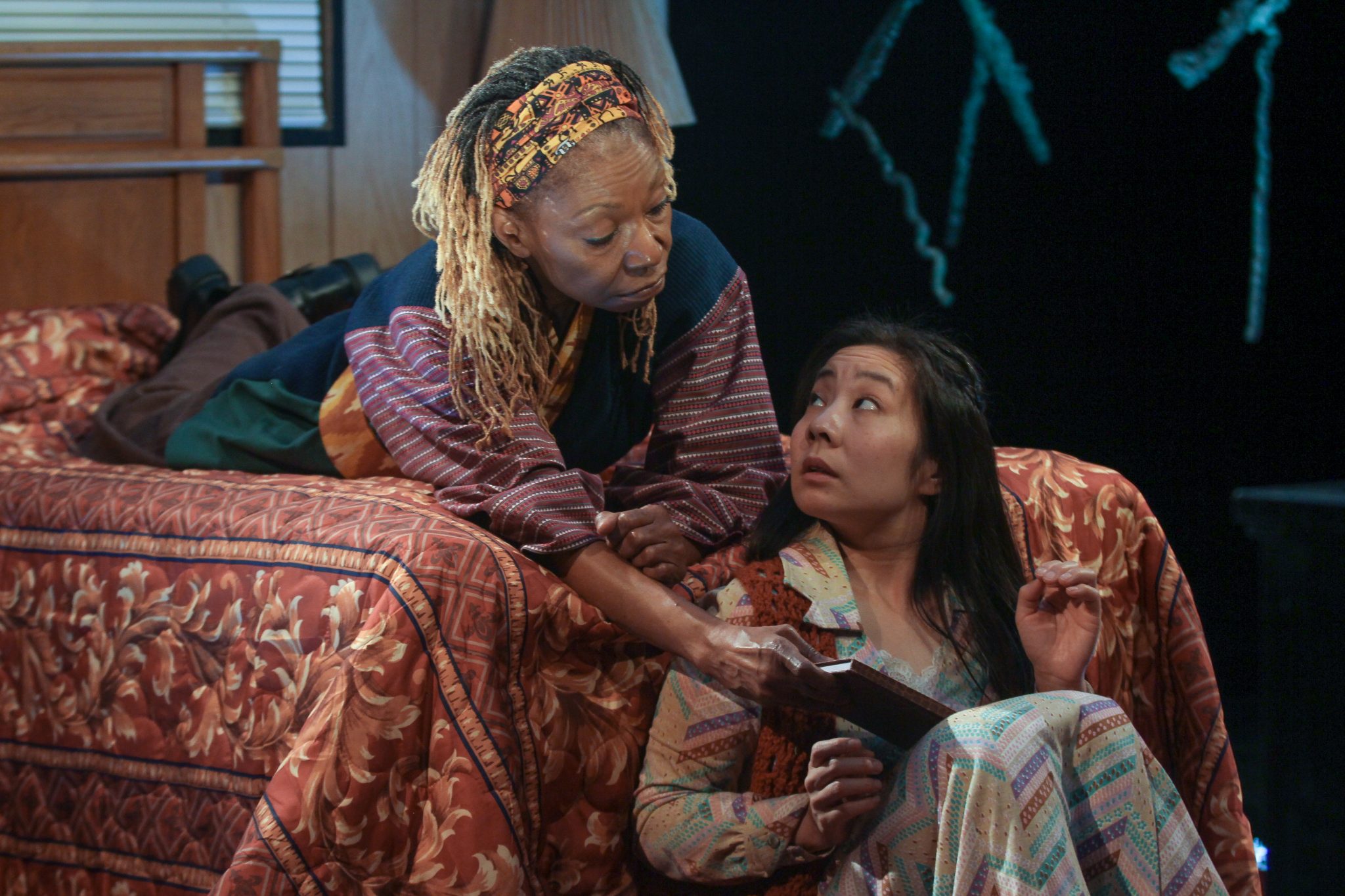 Ana is a Korean American who travels to Seoul in 1975 to retrieve her recently deceased father’s ashes. Luke is a young American soldier fighting in the jungles of Myanmar in 1944. Number Four is a Korean comfort woman camping out on a bridge in Seoul in 1950, waiting for the return of the young American soldier who fathered her daughter. Three separate time periods collide in a small hotel room in Korea, mediated by a shape-shifting Jesus. Among the Dead is a dark comedy about a family broken apart by betrayed promises, and finding each other again through SPAM, journals, and Jesus. Mostly Jesus.

For mature audiences only. Includes drug use, gunshots, sexual violence, smoke, and the use of herbal cigarettes.

“A smart and stinging new play.”

“Theatre Exile’s production of Hansol Jung’s Among the Dead addresses challenging topics …but it does so with purpose, compassion, and a generous pinch of humor.”

“…a soul-stirring production from Theatre Exile.”

“…a fascinating and mind-twisting plot…”

James Kern (Luke Woods)
I am THRILLED to be making my Exile Debut. I have many fond memories of seeing amazing work performed here, so for me to be able to work in that same space and with the same people is a real honor and treat. I went to undergraduate at the University of the Arts for Jazz Drum Performance and Temple University for acting. I am most recently returning from my three-year MFA program at the Hilberry via Wayne State University. I would also like to thank Meg, my loving and supportive wife, who supports me daily (financially and emotionally) and continues to inspire me to achieve my dreams. I would also very much like to thank my loving parents who have been my agents, my teachers and my friends. You can find me next in Canada doing a Newfoundland classic Salt Water Moon. Thank you all so much!

Claris Park (Number Four)
Claris Park is a Philadelphia based actor and theater maker and is thrilled to be joining Theatre Exile for the first time! Recent credits include Bob: A Life in Five Acts (Azuka Theatre), The Monster in the Hall (Inis Nua Theatre), and Much Ado About Nothing (Delaware Shakespeare). They have also performed with White Box Theater, the ReVamp Collective, and Philadelphia Young Playwrights. She was a part of the inaugural cohort of the Philadelphia Asian Performing Artists collective and the Asian Arts Initiative Mini Residency Program to develop the interactive piece, The DJZ. They are a graduate of the University of Pennsylvania. Thanks to her parents, Colin, and the cast and crew!

Bi Jean Ngo (Ana Woods)
Bi Jean Ngo is an AEA actor and holds an MFA in Acting from the Actors Studio Drama School in New York, and a Bachelor of Science in Film & Television from Boston University. She’s appeared onstage at Arden Theatre, Lantern Theater, InteraAct Theatre, Theatre Horizon, Delaware Shakespeare, 1812 Productions, and more. Bi also teaches at Temple University and occasionally directs. She’s excited to make her debut at Theatre Exile and thanks Deb & her castmates for this journey. Love to David. Website: www.bijeanngo.com

Samantha Dugan (Stage Manager)
Samantha Dugan is so excited to be a part of the Theatre Exile family! After working at sea with Royal Caribbean International , she’s happy to be back on dry land. Some favorite credits include Completeness (Theatre Exile), As You Like It (Saratoga Shakespeare), and Passage (The Wilma Theater).

Courtney Banks (Production Manager/ Installation Artist)
This is Courtney’s second year with Theatre Exile and first year as production manager. She has been involved as the assistant production manager of Theatre Exile for productions of Ideation and Really. She also works as a freelance stage manager working at companies such as Theatre Horizon and The Santa Fe Opera.

Melissa Dunphy composes political, vocal, and theatrical music, including The Gonzales Cantata, featured on The Rachel Maddow Show, and multi-award-winning vocal works Tesla’s Pigeon and What do you think I fought for at Omaha Beach? Her music and sound design has been heard on the stages of Azuka, Gas an Electric Arts, InterAct, People’s Light, Philadelphia Shakespeare Theatre, Pig Iron School, Simpatico, and many Fringe productions. She is a lecturer in Music Composition at Rutgers University, and Director of Music Composition for the National Puppetry Conference at the Eugene O’Neill Theater Center in Connecticut. Dunphy has a Ph.D. in music composition from the University of Pennsylvania and a B.M. from West Chester University. She and her husband Matt are currently developing a new performance venue, the Hannah Callowhill Stage, which they hope to open in 2020, and are co-hosts of the podcast The Boghouse. More info at www.melissadunphy.com

Eli Lynn (Intimacy Director/Fight Choreographer)
Eli (they/them) is an apprentice with Intimacy Directors International (teamidi.org), where they have over 60+ hours of training in Intimacy Direction and were part of the inaugural IDI Pedagogy Intensive. Locally, they coordinated intimacy for Completeness (Theatre Exile), and Such Things As Vampires (People’s Light). They have also studied stage combat for over nine years, are a recognized Advanced Actor Combatant with 5 international stage combat organizations, and are working towards Certified Instructor status with both the Society of American Fight Directors and Fight Directors Canada. Recent Fight Direction credits include Tis Pity She’s A Whore (PAC), Moby Dick (Hedgerow), and O War (Muhlenberg College). Soli Deo Gloria.

Cat Ramierez (Assistant Director)
Cat Ramierez directs and produces devised work, new plays, and community events that subvert societal norms. As a director, they have worked with Philadelphia Asian American Film Festival, Arcadia University, Director’s Gathering, Lxs Primxs, and Philadelphia Young Playwrights (among others). Cat has spearheaded a variety of programs – including, the only Asian American-focused craft fair in Philadelphia and Philadelphia Asian Performing Artists’ inaugural production of Tiger Style! By Mike Lew – and has worked with Orbiter 3, Lightning Rod Special, and InterAct Theatre Company. She is the Creative Director for Philadelphia Asian Performing Artists (PAPA) and the Public Programs Producer for Asian Art Initiative. Cat earned a B.A. from Vassar College in Drama.