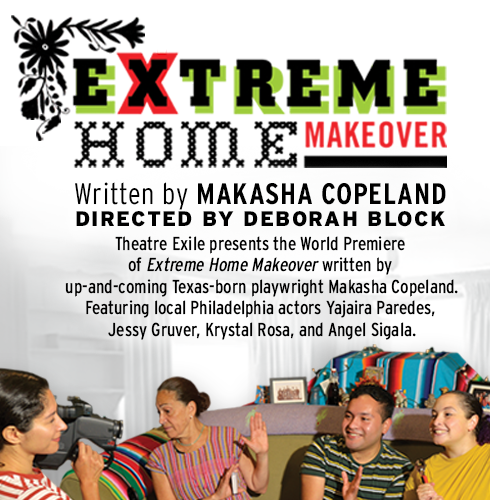 Extreme Home Makeover by Makasha Copeland paints a human portrait of a contemporary Tejano family willing to go to the extreme for a spot on the popular, rags-to-riches TV show of the same name. Following the Vega family who must fight to make their video application stand out, this earnest satire explores family dynamics in the face of financial hardship. Extreme Home Makeover is a beautifully complex, bold, funny, and hopeful story about a family striving for the American dream and begs the question – in a world where so many receive so little, how much do miracles cost?

All staff and patrons must be masked and vaccinated. Please be ready to present proof of vaccination when entering Theatre Exile.

SUBSCRIBE TO ALL THREE SHOWS FOR AS LITTLE AS $45.

“A rich portrait of a clan at a crossroads”

“[Extreme Home Makeover] is a hopeful story about the reality for many Tejano families living in Southern Texas. It also is funny at times and shows the true love of a tight-knit family.”

“A strong cast that captures both the play’s intermittent humor and its pathos.”

Jessy Gruver (Valentina) is thrilled to be making her Theatre Exile debut! Jessy is a Philly-based actor and singer last seen in Oedipus el Rey with Teatro del Sol, and Daphne’s Dive with South Camden Theater Company. She has performed with the Walnut Street Theatre South Pacific, Arden Theatre Candide, Utah Festival Opera and Musical Theatre Hunchback of Notre Dame and Seussical, PIFA/Kimmel Center Crystal Palace, Bristol Riverside Theatre Pride and Prejudice, Pirates of Penzance and various Musicales, and the Venetian Macao Resort, among others. Jessy is also a Burlesque artist and producer. Thanks and love to P and E. As always, for J. www.JessicaGruver.com

Yajaira Paredes (Guadalupe) is a Venezuelan actress with an experienced acting career (1980–1995). Yajaira worked in TV as a soap opera co-star, also in theater, and films. In Philadelphia, she took part in a voice-over series for pharmaceutical companies, such as “Pfizer”, “Johnson & Johnson”, and “Astra Zeneca”. She returned to the stage as an actress in NYC (2012) and as an actress/producer in Philadelphia (2013), with “Mujeres de Par en Par,” by Indira Paez, followed with “Passport” by Gustavo Ott, (2014, Fringe Festival in Philadelphia), and “Bodas de Sangre” de Lorca (2016). Presently, she is one of the creators of Teatro del Sol, the first bilingual theater company in Philadelphia.  Most recently, she played the role of Rosellie in “The Sea Voyage” directed by Dan Hodge, PAC, “Good Cuban Girls” by Iraisa Ann Reilly at The Arden Theatre, and “Secret Things” by Elaine Romero with Ariel Theatre (zoom). She currently is starring in “A Thousand Fibers” by Alec M. Hersh, Beacon Theatre, at Taller Puertorriqueno. You can follow her on Instagram: @yajairaparedes.

Krystal Rosa (Lupe) is very excited to work with Theatre Exile this season! Moving to Philadelphia from the Poconos has been the best career decision as this is her first professional production. After graduating Temple University she became a member of Power Street Theatre Company where she worked on productions as either an actor, ASM, marketing manager and/or director. PST is her theatre home. Currently, Krystal is a member of Creative Reaction Dance Company where she trains in different hip hop styles. To follow her journey, follow her on Instagram @sometimesimkool.

has been a consistent figure in the Philadelphian arts community for over 30 years as a director, dramaturg, producer, curator, choreographer, and educator. Deborah has been with Theatre Exile since 2006 and assumed the position of Producing Artistic Director in 2013. Prior to that, she was one of the founding organizers of Philadelphia Live Arts Festival and Philly Fringe (now FringeArts) and was program director for ten years. She received her MFA at Temple University where she taught for nine years. Prior to that, she taught at Rowan University, University of the Arts, and was a teaching artist in many K-12 programs. She has received much recognition for her professional and educational work including receiving the Independence Fellowship in the Arts and the Albert Benzwie Award for playwriting. She is currently on the board of Theatre Philadelphia and has sat on many local and national panels. A sampling of her previous affiliations includes Brat Productions, Theatre Ariel, Philadelphia Young Playwrights Festival, The Wilma Theatre, and the CEC. She has worked on over 50 professional productions. For Theatre Exile, she has directed Babel, Among the Dead, Sing the Body Electric, Guards at the Taj, Smoke, Red Speedo, Cock, The English Bride, Gruesome Playground Injuries, Iron, Hunter Gatherers, dark play or stories for boys, Roosters and collaborated on Heart & Soles.

Lian Brody (Assistant Stage Manager / COVID Safety Manager, They/he) is excited to work on their second production with Theatre Exile! They have stage-managed for Philadelphia Young Playwrights, Temple University Theaters, and Philadelphia Theatre Company’s now-disbanded ActOut Summer Camp program where they got their start in theatre working on devised projects with Philadelphia teens in 2013. Lian is interested in new plays, devised work, queer theatre, and drag artistry. When not working as a stage manager, they can be found drawing up tattoo designs and attending or performing in local drag shows. Thanks to Addy, Ollie, Jamie, Justine, and Kimba for their love and support!

Nat Merrill (Production Manager) is a sound and technology designer and engineer excited to be working on their second show with Theatre Exile! Based in Philadelphia, they have been sound designer for productions at Bryn Mawr, Haverford and Swarthmore, including Fucking A, Riot Antigone and Cabaret. Professionally, they have worked with New Century Theatre Company in Seattle and the Williamstown Theatre Festival. A recent graduate of Haverford College with a major in physics, they researched and wrote a thesis on acoustics in performance halls with RWTH Aachen University in Aachen, Germany. They are also a singer and composer.

Ariel (Liudi) Wang (Costume Designer) is a freelance Costume Designer and Makeup Designer. She came to the US from Beijing, China for graduate school and achieved her MS in Communication Management and MFA in Costume Design at Temple University. Her recent credits include Costume Designs for Babel, Among the Dead, and virtual production of D-Pad at Theatre Exile, The Chinese Lady at InterAct Theatre Company, Sunset Baby, Ready Steady Yeti Go at Azuka Theatre, Natural Shocks, Cry It Out at Simpatico Theatre, The Weir, Medea at Hedgerow Theatre, A Hundred Words for Snow at Inis Nua Theatre Company, Original devised play In America: That is to Say Nowhere, at Rowan University, and Our Town, The Odyssey at Temple University. See more of her design works at www.arielwangld.com

Noelani Montas (Assistant Scenic Designer) is in her final semester as a Theater Design and Technology major at University of the Arts, and is focusing in set and lighting design. Recent UArts credits include: Pippin (Co-Set Design), Elliot: A Soldier’s Fugue (Production Design), Pop! The Musical Exhibition (Production Design), and Momentos (Ensemble). She is a recipient of the 2021 Pat Mackay Diversity in Design Award, and is also a lighting design mentee in the 2021-2022 Wingspace Mentorship Program. E holomua.

Makasha Copeland (They/Them) (Playwright) is a playwright, actor, and comedian. Their plays include Extreme Home Makeover (2019 Agnes Nixon Award, San Diego REP, Teatro Espejo, FAU Theatre Lab, Capital Rep), Fabuloso! (Vertigo Productions, Sideshow Theatre), and Pitbull’s B-Day (The Tank). Most recently, they co-created, co-wrote, and performed in sketch-improv-play fusion Madre Mía/Minha Mãe through Ars Nova’s 2020 Camp residency. Currently, they are working on their splits for their next project, STDYCD: So The Dance, a dance-first, comedy-second spectacle at Ars Nova. Makasha is a member of sketch and improv teams Resting Witch Face (iO, Second City) and Social Studies (Brooklyn Comedy Collective). They graduated from Northwestern University with a degree in Theatre and Latine Studies, where they performed, wrote, and improvised with The Titanic Players, Griffin’s Tale, Mee-Ow, and Out Da Box.