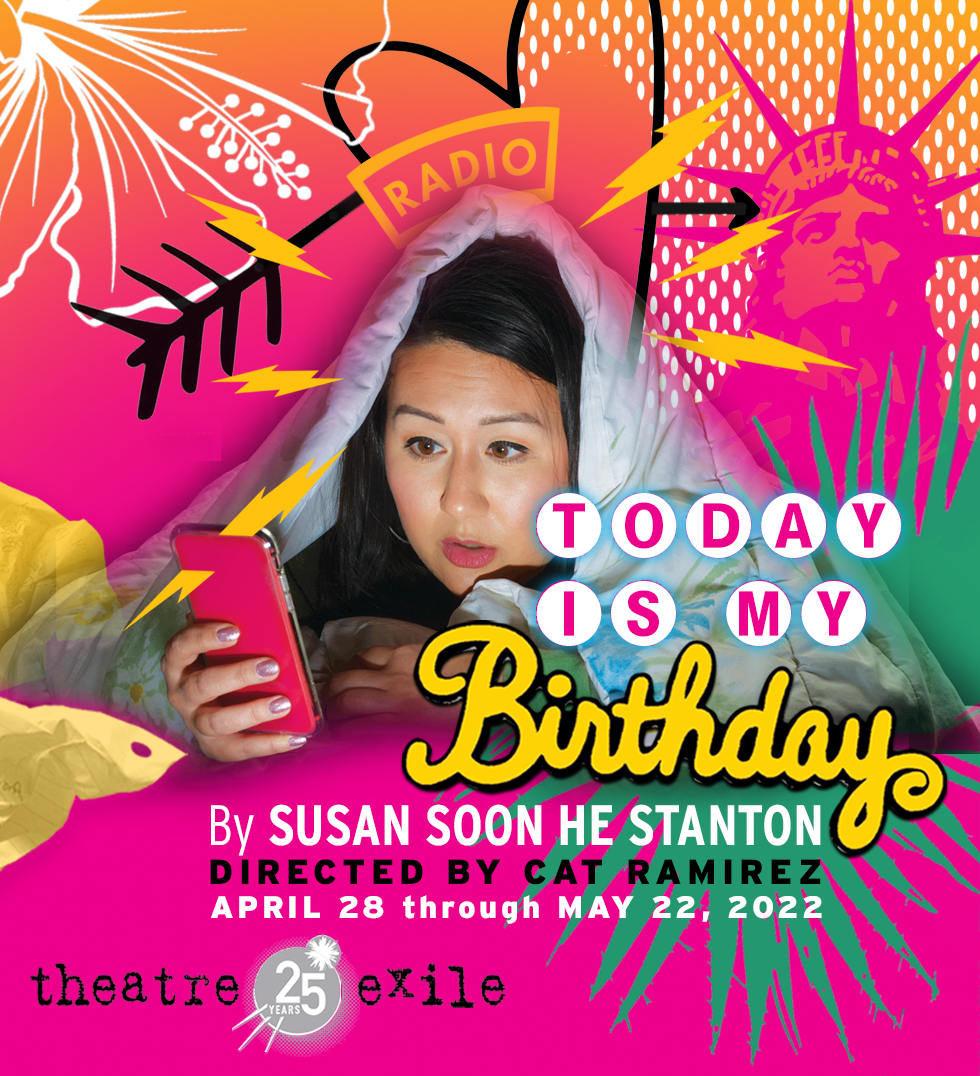 Today is My Birthday

Written by Susan Soon He Stanton
Directed by Cat Ramirez

Today is My Birthday is about life with a thousand friends on Facebook and no one to have dinner with on Saturday night. This quirky comedy by award-winning screenwriter and playwright Susan Soon He Stanton tells the story of would-be writer Emily, who moves back home to Hawaii after her bubble life in New York pops. As she trades one island for another, Emily, feeling unfulfilled, creates an alter-ego for a radio dating show, determined to turn fantasy into reality. Today is My Birthday, told through a playful mixture of live radio, voicemail, and phone calls, is about finding true human connection in a digital-obsessed world.

“A quirky exploration of connection and solitude”

“While [Susan Soon He Stanton] certainly didn’t set out to write a play about the pandemic, her lovely, funny script resonates in a way that it might not have three years ago.”

“[Today is My Birthday] explores our connections to one another in a time when connection is truly needed.”

“A clever, well-executed set design and a fantastic ensemble”

“Under the confident direction of Cat Ramirez, the cast elicits lots of laughter and many knowing nods from their audience.”

“Very entertaining and worth seeing”

Check out the latest buzz around Today Is My Birthday here!

Joseph Ahmed (Kurt, Sebastian, DJ Loki, Grandpa Z, Dr. Johannes Connection, Amazingpresence83, Harumi, Landon, he/they) is a Philadelphia-based theater artist whose work sloshes over into dance, circus, and interactive performance. They are a co-founder and worker-owner of the interactive performance company Obvious Agency. His solo performance, Half Magic, was developed through Philadelphia Asian Performing Artists’ Mini-Residency program. Most recently, they were seen in Backing Track (Arden Theatre Company) and QvK (Philadelphia Artists’ Collective). As a director, actor, and more, he has worked throughout Philadelphia with companies such as First Person Arts, Almanac Dance Circus Theatre, Tribe of Fools, the Philadelphia Asian American Film Festival, Asian Arts Initiative, the Philadelphia School of Circus Arts, and Team Sunshine Performance Corporation. He holds a BFA in Theater Arts from Boston University. Learn more and connect at www.josephahmed.com.

Daniel Kim (Dad, Bill Tapia, he/him) is an actor and standup comedian who has appeared across the country. While in Los Angeles, he played the villainous Judge Turpin in the award-winning production of Sweeney Todd at East West Players, the nation’s oldest Asian American theater. Dan also played family friend Stan on Margaret Cho’s sitcom All American Girl. In addition, Dan was a member of the Warner Bros. Comedy Writing Workshop. In Philadelphia, Dan most recently played the role of Atung in The Chinese Lady at Interact Theatre. In addition, Dan appeared in Tiger Style, the inaugural production of Philadelphia Asian Performance Artists (PAPA). At the South Camden Theatre (NJ), Dan played the role of Wong in both the premiere and revival of Fortune Cookies. Dan was also a founding member of the performance group Asians Misbehavin’ (NY & Philly Fringe Festivals, WYBE-TV), as well as the Edge of the World ensemble (NAATCO, LaMama). Dan has performed stand-up comedy at clubs in Chicago (Zanies, Comedy Cottage), New York (Improv, Gotham Comedy Club), and Philadelphia (Comedy Cabaret). Love to Doris, Melody, Maple, and Lolly!

You-Shin Chen(Set Designer, she/her) is a USA-based Taiwanese scenic designer for live performance and film. As a theater practitioner and collaborator, she is committed to diversity and humanity. You-Shin centers humans, both the characters and the viewers, and their experiences in her process of creating a three-dimensional space. She is always curious about human behaviors within a given space. She thinks about how both tangible and intangible elements shape space, and how those elements have an effect on the human psyche. Her design for Eclipsed (Lewis Center for the Arts) is featured in the USA exhibition at the 2019 Prague Quadrennial. She is the recipient of the 2019 Daryl Roth Creative Spirit Award at The Lilly Awards, as well as a Lucille Lortel Award for Outstanding Scenic Design in 2020. Some of her favorite credits include Wolf Play (Soho Rep), Mlima’s Tale (St. Louis Rep), Troy Anthony’s The Revival: It Is Our Duty (The Shed, NYC),Walden (TheaterWorks Hartford), SKiNFoLK (the Bushwick Starr& National Black Theatre), UGLY & The KILL ONE Race & Wednesday (Raja Feather Kelly & thefeath3r theory), and Mrs. Murray’s Menagerie (ArsNova). She is currently teaching at Muhlenberg College. Member of USA829. www.youshinchen.com

Janet Embree (Production Manager) is thrilled to be joining the team at Theatre Exile. She has managed productions at Lantern Theater Company, Opera Philadelphia, the Pennsylvania Ballet,
and Philadelphia Artist’s Collective, among others. She spent several years at the University of the Arts where she taught and managed productions in theater, dance, and music. She also does professional upholstery for the stage and screen; one of her favorite projects can be seen in the 2018 Grammy Awards.

Calvin Anderson (Lighting Designer, he/him/they/them) is a lighting and projection designer as well as production manager. They have a strong pull towards the devised, the radical and the risky, while leaning towards projects with heart and trust. Favorite projects range from dance and theater to live music, opera, cabaret and drag. Career highlights include designing The Method Gun (Wesleyan University), Late Night Snacks 2019 (Bearded Ladies Cabaret/ Philadelphia) Oscar at the Crown (The Neon Coven/ NYC), Orchid Receipt Service (Mirror/Fire Productions/ NYC), Old Man and the Sea (Pittsburgh Playhouse, PA) and Flipzoids (Generator Theater/ Alaska). Calvin was the Lighting Director for Ailey II, and Production Manager for Do You Want a Cookie? (Bearded Ladies Cabaret/ Philadelphia). He is the resident lighting & projection designer and production manager for FJK Dance in New York and has had the privilege to tour the world over with various projects. Calvin is Production Manager for The Bearded Ladies Cabaret. They are also an educator, mentor, and proud member of Wingspace Theatrical Design and United Scenic Artists Local 829. #blacklivesmatter.

Ariel (Liudi) Wang (Costume Designer) is a freelance Costume Designer and Makeup Designer. She came to the US from Beijing, China for graduate school and achieved her MS in Communication Management and MFA in Costume Design at Temple University. Her recent credits include Costume Designs for Babel, Among the Dead, and virtual production of D-Pad at Theatre Exile, The Chinese Lady at InterAct Theatre Company, Sunset Baby, Ready Steady Yeti Go at Azuka Theatre, Natural Shocks, Cry It Out at Simpatico Theatre, The Weir, Medea at Hedgerow Theatre, A Hundred Words for Snow at Inis Nua Theatre Company, Original devised play In America: That is to Say Nowhere, at Rowan University, and Our Town, The Odyssey at Temple University. See more of her design works at www.arielwangld.com

Anthony Martinez Briggs (Sound Designer, they/he) has a crush on fashionable sneakers, well-cultivated herbs, low lactose cheese, and science fiction novels written by black femme authors. They are a Wilma HotHouse company member, Bearded Ladies Associate Artist, curator, teaching artist, performer, writer, and sound designer. They have been acknowledged by a few accolades and nominations here and there. They are also known as “Us”: emcee and original member of the band ILL DOOTS, seen on theater stages throughout the Philly area as well as music venues across the country. Their recent double album “The Mess/age” is available everywhere; follow @ILLDOOTS because there is more to come!

Tyler Elliot (Dialect Coach, he/him) Theatre credits include, recently: The Weir, Cowboy v. Samurai (Hedgerow), Romeo and Juliet (Lantern Theater Compan) Twelfth Night (Powell House) Diary of Anne Frank, Dot (People’s Light), and Candles (PYP, World Premiere). He would like to thank his family for their love and support and Theatre Exile for their kindness, care, and commitment to storytelling and authenticity. Naʻu me ka haʻahaʻa and mahalo.

Max Segarnick (Assistant Director) is a student of the Brind School of Theater Arts at UArts. This is his Exile debut! Recent endeavors: Crimson Lit (Polyphone), I and You (Resilience Theatre Group), Pippin (UArts). Thanks to Cat & Deb for the opportunity!

Lian Brody (Assistant Stage Manager, CSO, they/them) is excited to work on their fourth production with Theatre Exile! They have stage-managed for Philadelphia Young Playwrights, Temple University Theaters, and Philadelphia Theatre Company’s now-disbanded ActOut Summer Camp program where they got their start in theatre working on devised projects with Philadelphia teens in 2013. Lian is interested in new plays, devised work, queer theatre, and drag artistry. When not working as a stage manager, they can be found drawing up tattoo designs and attending or performing in local drag shows. Thanks to Addy, Ollie, Jamie, and Kimba for their endless love and support!

Nat Merrill (Sound Engineer) is a sound and technology designer and engineer excited to be working on their second show with Theatre Exile! Based in Philadelphia, they have been sound designer for productions at Bryn Mawr, Haverford and Swarthmore, including Fucking A, Riot Antigone and Cabaret. Professionally, they have worked with New Century Theatre Company in Seattle and the Williamstown Theatre Festival. A recent graduate of Haverford College with a major in physics, they researched and wrote a thesis on acoustics in performance halls with RWTH Aachen University in Aachen, Germany. They are also a singer and composer.

Susan is a producer/writer HBO’s Succession, for which she has won a WGA and Peabody Award. Upcoming television work includes HBO/Sister Picture’s THE BABY, Amazon’s Modern Love, Amazon/Annapurna’s Dead Ringers, Hulu/Element Pictures/BBC’s Conversation with Friends adapted from the novel by Sally Rooney, as well as several projects in development.

Susan holds a BFA from NYU Tisch’s Dramatic Writing program and an MFA from Yale School of Drama, where she received the Audrey Woods Fellowship and the Eugene O’Neill Memorial Scholarship.