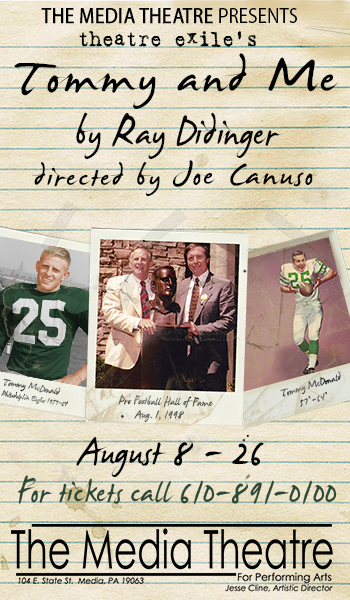 Tommy and Me is autobiographic and recounts a seminal time in Ray Didinger’s life as he helps his life-long hero, Tommy McDonald, reach his goal of getting into the Pro Football Hall of Fame.

“Tommy and Me at Media Theatre: A Philly heartwarmer”
http://www.philly.com/philly/entertainment/arts/tommy-and-me-at-media-theatre-a-philly-heartwarmer-20180809.html?__vfz=medium%3Dsharebar

Matt Pfeiffer (Ray)
Matt is a Philly born actor and director. Credits include; Arden Theatre, Walnut St. and 20 seasons with the Pennsylvania Shakespeare Festival. Matt is a two-time Barrymore winner for his direction for Theatre Exile and a recipient of the F. Otto Haas Award. Love to Kim and John.

Tom Teti (Tommy)
My father started taking me to Eagles games when I was six. Connie Mack Stadium, then Franklin Field. When the game was away, we were anchored to the television, eating our legendary Italian Sunday dinner off of tray tables which could barely hold Mom’s five course pride and joy. We were Eagles fans, and Sunday was Eagles’ time. As a little boy, I became fascinated with a player who didn’t seem much bigger than I was. The smallest guy on the field, the bravest guy on the field, Tommy MacDonald never was less than everything you wanted him to be – a great receiver, a fearless player, a hero who always caught the ball, and always bounced up. I saw every game he played as an Eagle. It is a truly amazing privilege to be in this play. This one is for Dad, Uncle Frank, Leo, and all the guys who took up two rows of Section EB. Oh, yeah, in between then and now, I did some theater and a little TV in the United States.

Simon Canuso Kiley (Young Ray)
Simon is 13 years old and loves music, dancing, acting and pretty much any kind of art form. He is going into 8th grade at GAMP (Girard Academic Music Program). He enjoys playing the cello and the piano.ald for all those wonderful Sundays at Franklin Field.

Joe Canuso (Director)
is the Founding Artistic Director at Theatre Exile where he directed many of their shows including Rizzo, The Philly Fan, Who’s Afraid of Virginia Woolf and recently Ideation. He was nominated by The Barrymore Awards for Outstanding Direction three times and was named Best Director by The Philadelphia Weekly for Blackbird. Love to Trish.

Bruce Graham (Dramaturg)
Graham is the author of Burkie, Early One Evening at theRainbow Bar & Grille, Moon Over the Brewery, Minor Demons, Belmont Avenue SocialClub, According to Goldmman, Desperate Affection, Stella and Lou, Coyote on a Fence, The Champagne Charlie Stakes, Funnyman, The Craftsman, North of the Boulevard.  Graham has won consecutive Barrymore Awards for Best New Play (SomethingIntangible,Any Given Monday) the Joseph Jefferson Award (The Outgoing Tide) and a Jeff nomination for White Guy on the Bus. White Guy on the Bus is currently nominated for the “Offie” – London’s version of the Obie Award. His new play, Sanctions, opens at Delaware Theatre Company this September.

Katherine Fritz (Costume Design)
a costume designer, writer, and educator. Recent design work at Signature Theatre, Arden Theatre Company, Theatre Exile (Barrymore Nomination, Outstanding Costume Design), Act II Playhouse, InterAct Theatre Company, Philadelphia Artists’ Collective (Resident Designer, 7 seasons), among many others. As a writer, her work on her blogs Ladypockets and I Am Begging My Mother Not To Read This Blog has been critically acclaimed and read by millions. Publications include The New York Times, The Washington Post, American Theatre Magazine, and MTV Style. Last year, Katherine raised over $72,000 for education-based charities in a viral political stunt to “buy” her senator’s vote. Katherine was a 2017 finalist for the F. Otto Haas Award for an Emerging Theatre Artist, teaches costume design at University of the Arts, and is the managing director of the Pennsylvania Theatre Institute, a new summer program for young artists in Chester County. katherinefritz.com and www.pennsylvaniatheatreinstitute.com for more.

Flora Vassar (Properties)
is a stage manager and prop maker. Most of the time she can be found on tour with the NYC-based Acrobuffos, as stage manager / lighting supervisor for Air Play (airplayshow.com). She serves on the board of directors for Philadelphia’s creative reuse center, The Resource Exchange (theresourceexchange.org).

Michael Kiley (Sound Design and Original Music)
a sound designer, composer, performer and educator working in theatre and dance. He has designed and composed for numerous Theatre Exile productions, including Rizzo,The Invisible Hand and The Aliens. Other theatre credits include The Arden Theatre, People’s Light, and others. Dance collaborations include Faye Driscoll, luciana achugar, Nichole Canuso Dance Company, Chelsea and Magda and SubCircle. Michael makes his own work under the moniker The Mural and The Mint, including The Empty Air and Animina, two GPS controlled compositions for iPhone. He is a 2016 recipient of The Pew Center For Arts and Heritage Project Grant to produce Prescription, an immersive, participatory voice piece next Fall.

Michael Long (Video/Projection Designer)
does freelance film and theatre work in the Philadelphia area. He graduated from Drexel University with a B.S. in Film and Video production. Projection design credits include: Bengal Tiger at the Baghdad Zoo (Temple University), Beautiful Boy (Walnut Street Theatre), This Is the Week That Is 2012 (1812 Productions), Crowns (Delaware Theatre Company), How to Disappear Completely andNever Be Found (Luna Theater Company), and The Rape of Lucretia (Curtis Institute). For more information, visit MichaelLongfilms.com

Ray Didinger
Ray Didinger is an award winning sports writer. Among his many distinguished acknowledgements, he won the McCann Award which is presented by the Pro Football Writers of America (PFWA) in recognition of long and distinguished reporting in the field of pro football. He also won six Emmy Awards as a producer and writer with NFL Films. He is the author of eleven books on sports, including his three most recent bestsellers: The Eagles Encyclopedia, One Last Read, and The Ultimate Book of Sports Movies.  Among his many media outlets, Ray is currently a host on 610-WIP all-sports talk radio, and appears on Comcast SportsNet TV as the primary analyst on Eagles Post-Game Live.