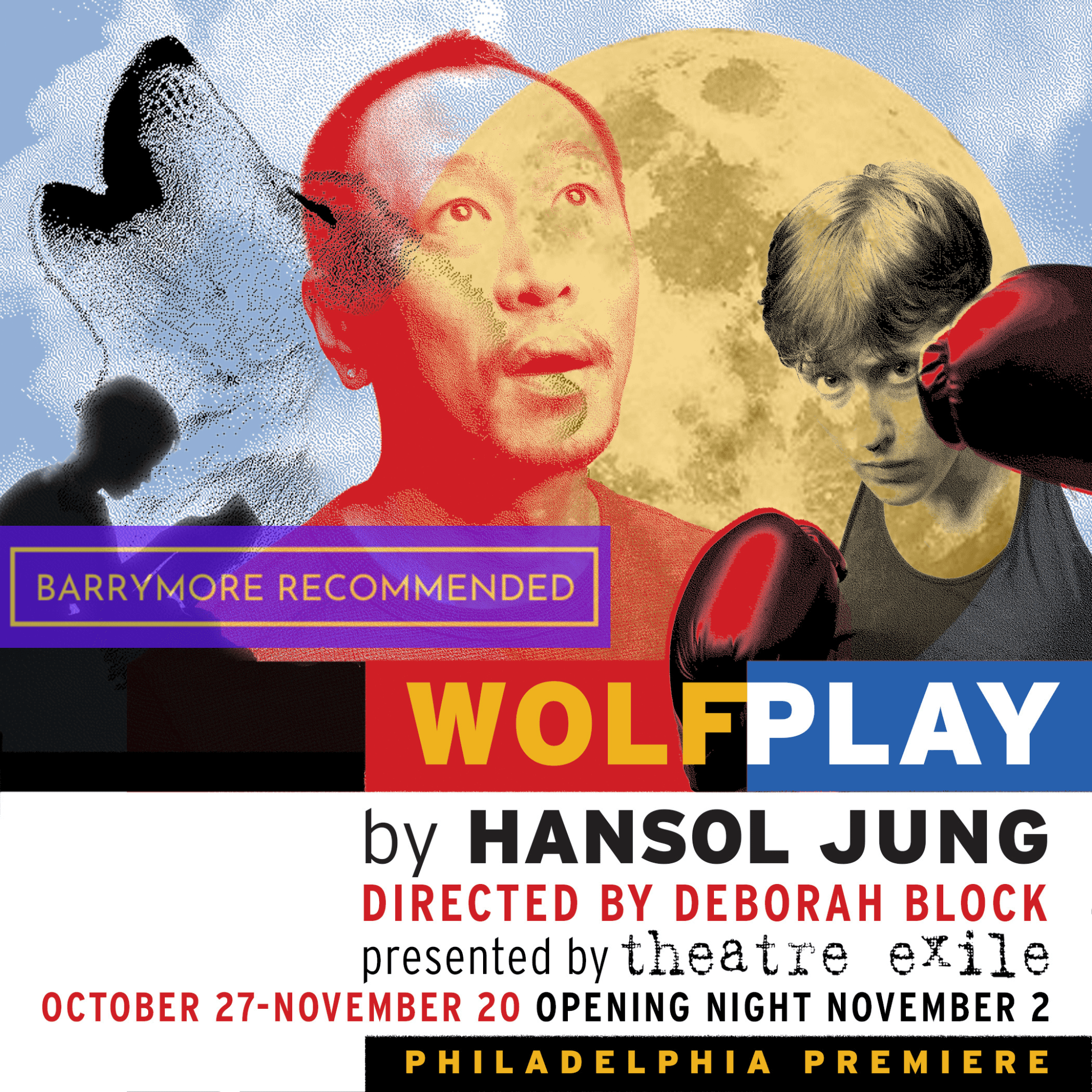 A woman, longing for a child, finds a Korean boy looking for a new home on a Yahoo chat board. Her wife is a promising boxer on the verge of a pro-debut. The boy’s original adoptive father was all set to hand him over to a new home… until he realizes that the boy would have no “dad”. Caught in the middle, the child launches himself on a lone wolf’s journey of finding a pack that he can call his own.

What The New York Times called “thrilling…probing and playful”, Wolf Play by Hansol Jung is a messy, funny and disturbing theatrical experience about the families we choose and unchoose.

Bruce Baldini (Ash) is a Germantown based, Philadelphia theater, film and drag artist committed to creating more opportunity for the gorgeous trans community in Philly and beyond through producing theater and film projects that are by and for us. During the pandemic they received their 200HR Yoga certification and spent time reconnecting with their physical storytelling dreams. In the future they are hoping to explore more film as well as finally pursuing dreams in puppetry and dance. They are always looking for curious collaborators and hope to continue traveling around the city, country and world to find them.

Keith J. Conallen* (Peter) Is a Philadelphia resident, HotHouse company member at the Wilma Theater. Keith has been seen on most of the city’s stages. Previously with Exile: Red Speedo, Gruesome Playground Injuries, The Lieutenant of Inishmore, Shining City. Next up: Twelfth Night at Wilma Theater

Makoto Hirano (Wolf, he/him/his) is a Philadelphia-based choreographer and theatre maker. His award-winning, original performance projects have been presented nationally in numerous venues and festivals including Off-Broadway at the National Asian American Theatre Festival (NYC), DanceTruck (Atlanta, GA), Ringling Museum (Sarasota, FL), Yale University (CT), and FringeArts (Philadelphia, PA). As a creator-performer, Hirano has originated over 20 roles, with highlights that include projects with Bill Irwin, Pig Iron Theatre Company, Nichole Canuso Dance, and Thaddeus Phillips/Lucidity Suitcase Intercontinental. Hirano is a founding member and current advisor to the arts collective PAPA (Philly Asian Performing Artists); co-founder of installation art duo Gatto+Hirano; co-founder of Team Sunshine Performance where he is a creator, producer, performer, and choreographer. From 2007-2014 Hirano was a Facilitator with Philly/Baltimore/South Carolina-based professional development program Artists U. A former U.S. Marine, Hirano earned his BFA in dance at Temple University.

Kira Player* (Robin, she/her) is a recent transplant to Philly and is loving the community she’s finding here. She feels lucky to already be breaking into the theater scene this past summer in Athena (Theatre Horizon) and The Taming! (Shakespeare in Clark Park). Past credits include Votes for Women (Speranza Theatre Co), Inside Siberia (Rootbeer Theatre Occasion), A Midsummer Night’s Dream (Alabama Shakespeare Festival), And Then They Came for Me (Alabama Shakespeare Festival), Belleville (Company of Fools), A Doll’s House Part 2 (Theatreworks Hartford). Huge thanks to her family for believing in her crazy. More at kiraplayer.com

Ariel (Liudi) Wang (Costume Design) is a freelance Costume Designer living bicoastal. She came to the US from Beijing, China for graduate school and achieved her MS in Communication Management and MFA in Costume Design at Temple University. Her recent credits include Costume Designs for The Raven at Opera Philadelphia, Today is My Birthday, Extreme Home Makeover, Babel, Among the Dead, at Theatre Exile, The Chinese Lady at InterAct Theatre Company, Reverie, Sunset Baby, Ready Steady Yeti Go at Azuka Theatre, Natural Shocks, Cry It Out at Simpatico Theatre, The Weir, Medea at Hedgerow Theatre, A Hundred Words for Snow at Inis Nua Theatre Company. Find more of her designs at www.arielwangld.com

Nat Merrill (Sound Engineer) is a sound and technology designer and engineer excited to return to Theatre Exile! Based in Philadelphia, she has been the sound designer for productions including High Noon (Ninth Planet), Shakespeare’s R&J (New Light Theatre Company), Fucking A (Swarthmore College), Riot Antigone and Cabaret (Haverford and Bryn Mawr Colleges). She has worked with Theatre Exile, 11th Hour Theatre Company, the Bearded Ladies Cabaret, New Century Theatre Company in Seattle, and the Williamstown Theatre Festival. A graduate of Haverford College with a major in physics, she researched and wrote a thesis on acoustics in performance halls with RWTH Aachen University in Aachen, Germany. She is also a singer and composer.

Melody Wong (Stage Manager) is thrilled to be working with Theater Exile. Recent credits include Dreamgirls with Theater in the X, Di Hati Ku with Fleisher Art Memorial and Modero & Co, In Search of the Kitchen Gods with 1812, Group!, Janet Wide Awake and Ok Trenton with Passage Theatre. The Ongoing Plight of the Ferryman at Plays and Players. Additional credits: SM for; TURN! Polly Mope, Lashed but not Leashed, Black Light, The Outer Space, The Kinetic Tree, PIFA 2016 at the Kimmel Center for the Performing Arts, Minorityland with PowerStreet Theater, The Wiz with Theater in the X, Tiger Style with Philadelphia Asian Performing Artists, Master Harold and the Boys, with EgoPo Classic Theater, Barrymore Awards 2018/2019, ASM Whitman! Contradict this! with Bearded Ladies Cabaret, Assistant to the Director for the live capture of La Triviata, Turandot, The Marriage of Figaro with Opera Philadelphia.

Janet Embree (Production Manager) is thrilled to be joining the team at Theatre Exile. She has managed productions at Lantern Theater Company, Opera Philadelphia, the Pennsylvania Ballet and Philadelphia Artist’s Collective, among others. She spent several years at the University of the Arts where she taught and managed productions in theater, dance and music. She also does professional upholstery for the stage and screen; one of her favorite projects can be seen in the 2018 Grammy Awards.

Visit Philly: Things to Do in Philadelphia this Week & Weekend

Philadelphia Tribune: ‘Wolf Play’ actress wants to do it all